Which mains energiser:
fenci or impuls?

Not sure which energiser is right for you? Click below to 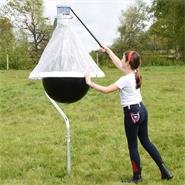 An affordable alternative to the proven Tabanus Trap! With standard auger, EasyClean function, reinforced funnel and big bait ball. Captures reliably 95% of all horseflies over 2.5 acres.

As soon as it gets warm outside all horse, cattle and donkey owners have the same problem – horseflies. Horseflies are the largest type of gadfly and most feared by those with allergies to their bites, particularly by horse and cattle owners. The 2 cm long insect inflicts painful wounds, carries the EIA virus, Lyme disease and can result in allergic reactions in humans and animals.

How does the VOSS.farming "Edge" horsefly trap work?

The principle of the horsefly trap is simple: a black ball looks like the rear of an animal. Horseflies are only able to detect differences between light and dark. The black ball and the white transparent funnel are the ideal contrast to confuse the insect. The black ball warms up as it hangs in the sun. The flies then mistake this for a warm-blooded living creature. They attempt to bite the ball, but fail. Their poor ability for precision flying means that they will only fly off in an upwards direction. However, the funnel and trap container is waiting for them there. The insect can then no longer escape and fly away, keeping people and animals free from bother.

This pricniple has been tested over decades and is 100% working. The trap can catch more than 95% of all horseflies in an area of 2.5 acres and is environmentally friendly.

Here is what you need to know: 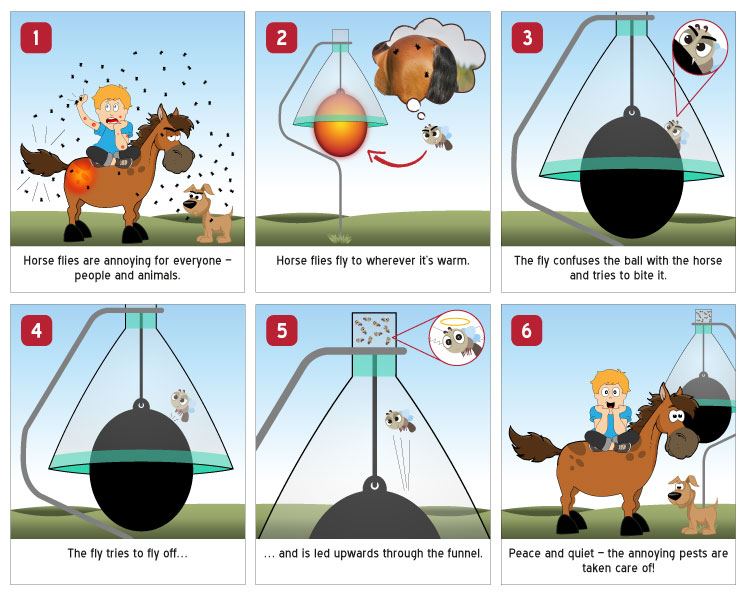 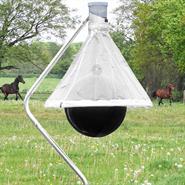 „easy to put together went in the ground well should do the job.“

„Set up in the paddock where my horse was being pestered to death by horse flies.\nGood quality and well made. So far we have only caught six horse flies, but that’s six of the nasty little bastards which won’t bite me or the horse in the future.\nIt is late in the season and next year I will reposition closer to the local watercourse.“

For this product we offer 3 year warranty

Under current legislation we are obliged to offer warranty for 2 years only. We offer an extra year at no additional cost.

We offer the lowest price guarantee on all products from VOSS.farming in our online shop.
Should you find an identical VOSS.farming product cheaper elsewhere within 14 days of the date of purchase, we will refund you the difference.
This does not apply to products on sale and sales of remaining stock. The lowest price guarantee applies to the product value excluding shipping costs and not to offers in the VOSS electric fence online shop.
Why? We have invested a lot of time and effort into training our expert customer service advisors and creating a store that is easy to navigate. That is why electric-fence.co.uk is the UK’s premium trade channel for VOSS.farming.