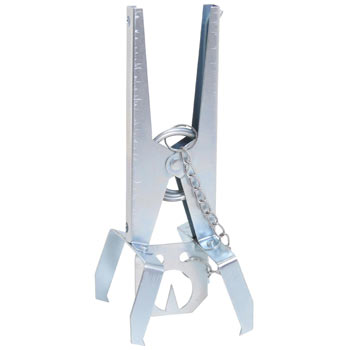 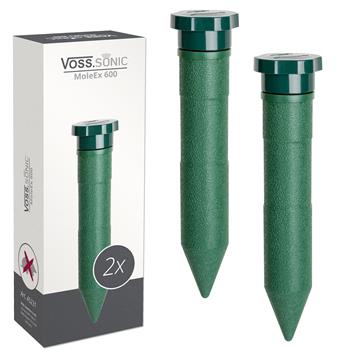 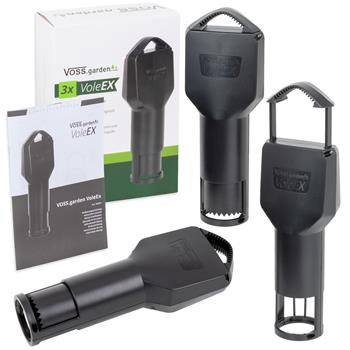 Do you want to scare off root voles, but don’t know how?

Many different products exist to drive away root voles. Root voles belong to the vole family and should not be confused with moles which are a protected species. Using these traps to catch moles is prohibited by law. Please respect this.

Moles are beneficial animals where as voles are pests. At first glance, a molehill may look like the mound of earth created by a vole. However, a closer look will tell you which animal is digging up your garden.

Have I got a mole or a vole in my garden?

Unlike molehills, the mound of earth produced by a vole is generally lower and shapeless. Molehills look like a volcano crater and have a regular shape.

The mounds created by voles generally include the remains of plants within the pile of earth. These are the leftovers of roots which the vole has eaten beneath the earth’s surface. Now it’s even more important to drive the vole away so that your plants don’t suffer any more damage.

You can also tell a vole by its mouth. A vole’s mouth is round to vertically oval in shape, while a mole’s mouth is horizontally oval.

When should I attack voles?

You should always attack voles! Voles breed up to 5 times a year, producing 2 to 10 young. The mating season starts in March and continues until October. Therefore it’s advisable not to wait until the summer. If we consider that voles are sexually mature after 2 months, this means that:

From March to October, a vole will have 50 descendants. These descendants could then each have another 50 descendants in one year. Therefore, in approx. 600 days, one little vole could produce another 2,500 voles. It comes as no surprise that voles can ruin entire fields, as, given their rapid reproduction rate, if the field becomes infested, it will be extremely difficult to keep them under control.

Vole control – which methods are effective in controlling voles ?

Many different products for scaring off voles exist on the market. There are also those good old tips and tricks such as using dog hair, oil cloths or similar ideas. The only problem is that on the one hand, these tips don’t work, and on the other you don’t really want to be putting cloths soaked in oil or diesel into the soil.

Driving away voles with mechanical traps

It is precisely in fighting against this pest, the vole, that one manufacturer has earned itself a good reputation over recent years. This is the company, Swissinno. With their “Super Cat” product, this company has developed a vole trap with an extremely high catch quota. Swissinno’s headquarters are based in Switzerland. The company’s vole traps have become established in the area of gardening. For just under 20 Euros, you can acquire a complete set including a probe to help you locate the vole tunnel.

These traps are effective if the vole is not in the process of pushing earth through the tunnel. The Swissinno Super Cat’s general procedure is:

First, find a vole tunnel, then place the Swissinno Super Cat there. Then tension the trap. There is a strong spring inside the trap itself. When this spring is triggered, a flap closes sharply, ideally braking the vole’s neck. It dies immediately without suffering. A vertical rod forms the trap’s triggering mechanism. When touched, it activates the trap. This is the trap’s main weak point. In the soil, the vole piles earth in front of itself. Thus, the vole trap is also triggered if earth or stones come into contact with the rod, rather than a vole. Swissinno Super Cat is an affordable trap with a high catch quota.

Vole shooting traps are loaded with a blank cartridge which releases a high-powered blast, killing the vole in milliseconds. The blast rips through the vole’s lungs; when the trap is triggered it can also rip through layers of earth of up to several centimetres thick. The effectiveness of this type of trap is unrivalled. By responsibly using and maintaining the trap, it will last a life time and can be passed on to your children.

In Germany, vole shooting traps are subject to certified technical testing by the Physikalisch Technische Prüfanstalt (PTB) – a state-certified test laboratory. Only this type of shooting device with PTB identification may be sold in Germany.

As the PTB number suggests, Auber PTB 2 is the vole shooting trap model. This trap is manufactured using Germany’s aluminium die casting methods. The trap is less prone to corrosion and just needs to be oiled from time to time.

The trap’s body looks like a torpedo and can be easily placed inside the tunnel. For optimum success, proceed as follows:

Open up several areas on the mound of earth created by the vole. This will enable you to locate the entrance to the vole’s tunnels. As voles don’t like light, after a short while, they will try to “close” the holes that you have made. Open these holes up again and position the trap. Set the trap and wait. The vole will return to its tunnel, aiming to close the holes. By applying pressure on the earth in an effort to close the holes, the vole will trigger the trap. After the trap has been triggered, you’ll often find the vole hurled back up to 30 cm inside the hole. Due to the extremely sensitive triggering mechanism, the trap reacts very reliably. Failure is unheard of with this trap.

The Kieferle W2 PTB 875 is undoubtedly the best-known vole shooting trap. Manufactured in Germany, the very name “Kieferle” is a frequently used synonym for shooting traps.

Kieferle’s extensive range of shooting traps include a variety of extremely high-quality and fully developed vole traps. Similarly to Auber traps, the Kieferle trap can also be positioned vertically in the tunnel.

However, the product range also offers a self-shooting holder which enables you to place the shooting device in an optimum perpendicular position inside the vole’s tunnel. This prevents the shooting trap from slipping in the tunnel, becoming blocked or being accidentally triggered as it slips. It also prevents the vole shooting trap from being triggered by the earth which the vole pushes in front of it towards the trap.

When the vole moves through the tunnel it pushes the mechanism upwards. When the trap is triggered, the blast, which can even rip through thick layers of earth, kills the vole. Together with the high-quality “Made in Germany” workmanship, the high success rate makes this model a true vole trap classic.

The Göbel Torero 935 is a variation of the Kieferle W2. It features an earth protector in its trigger range which prevents the mechanics from getting blocked up. This protects the triggering mechanism, thus securing its function, even in sandy earth. The Göbel shooting trap can also be positioned perpendicularly. Thus, the vole has to push the mechanism upwards. This can be caused by the earth and by the vole. Both ways result in the trap being triggered.

When setting the device, you must ensure that the trap is not placed to high or too low in the tunnel. If it is placed too low, this will block the path, and if it is placed too high, the vole will not trigger the trap. This requires a little skill and ability. The Kieferle trap holder also fits this model. It helps to increase the catch quota.

The Top-Fox PTB 936 is a trap which is only ever placed vertically in the tunnel. The trap is optimised for this type of hunting and features a special triggering mechanism which can be compared to a swinging door in a saloon. If the vole comes up against the mechanism, whether from the left or right, the trap will be triggered. This vole trap made with Faust e.K’s precision engineering is made from solid galvanised steel.

The extremely fine mechanism and high-quality manufacturing mean that this trap is ideal for achieving a high catch quota. This shooting trap is the “non plus ultra” of shooting traps. It substitutes 2 ordinary traps and so is well worth the price.

Regardless of the trap you opt for, it’s always important to follow the user instructions. Every vole is different, which means that you may require several attempts or that the desired effect may take a little longer to achieve. Also follow the tips for maintenance. Clean the trap after each use. Oil the vole trap with maintenance oil, preferably after each use. If used correctly, the risk of accidental triggering the shooting trap is extremely low.