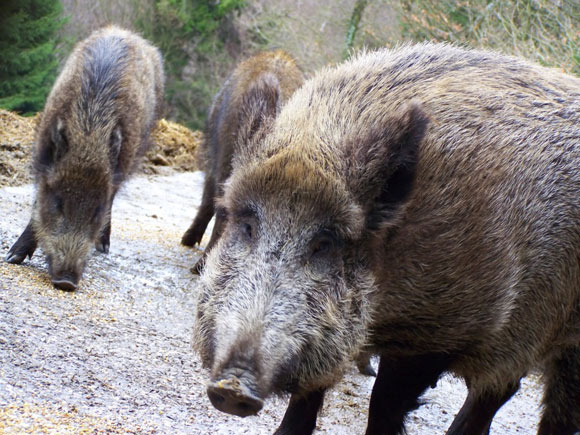 Wild boars belong to the pig family. Wild boars can be recognised by their bristly dark grey and black-brown fur. Newborns typically have yellowish stripes that after 4 months will fade into a brown all-over coat. Compared to domesticated pigs, wild boars have a heavy built, stocky body and long legs. Particularly notable is the powerful, wedge-shaped head with a short snout. They use this snout to rummage around in the soil on the hunt for food. Their small eyes mean that wild boar have rather poor vision. Their sense of smell and hearing is, however, excellent. The size and weight varies greatly by region and by the food sources available. Fully grown male boars can grow to be 1.8 m long, 1.1 m tall and weigh 200 kg. The females (sows) are somewhat smaller and lighter. Their very distinct canine teeth are mostly for display, but are also used as a weapon in battle. This can happen during the mating season, for example, when two male boars fight over a sow.

Wild boars are very sociable and mostly live in family groups with a clear hierarchy. Sows are sexually mature at 8–10 months old, whereas the males only become sexually mature at the age of 2 years. The mating behaviour of the sows and the exact start of the mating season is determined by the oldest fertile sow (matriarch). This season usually takes place between November and January. If the matriarch is lost, then uncontrolled year-round breeding can happen in which even the one-year-old sows take part. For this reason, hunters are required not to shoot the matriarch sows to prevent the intact rut from falling apart.

Piglets are born 114–118 days after copulation, mostly between March and May. One litter can have up to 12 piglets. The sow gives birth apart from the rest of the sounder in her nest. Only once the piglets can keep up with the rest of the sounder will she rejoin it. Mild winters and improved food sources have seen the number of piglets dying reduce and sows are able to raise most of their young. It must be noted that in line with the federal hunting law (paragraph 22, section 4), it is not permitted to shoot sows carrying young.

Wild boar are highly adaptable omnivores. As well as nuts and acorns, chestnuts and beechnuts, they also like to eat crops such as corn, potatoes and grains. Fruit, clovers, herbs and roots are also eaten. For their daily protein, wild boars search the soil for grubs, small reptiles, eggs from ground birds and insects.

The total amount of food available to boars has increased massively in the last few decades and has contributed, amongst other factors, to their increase in numbers. The large corn fields, which are often criticised, offer wild boars both a source of food and protection from hunting. In the forests too, there is an increase in food sources. Heavy storms have cleared more and more grazing lands over the last few decades. A long succession of years where trees produced an exceptionally high number of seeds that are eaten by the boars has provided them with more and more of their main food sources – beechnuts and acorns. Year-round feeding by humans also contributes.

Boars are active both day and night and are found in a range of different habitats. They are mostly found in deciduous and mixed forests with a high proportion of beech and oak trees. They can also be found, however, in fields and swampy areas with reed beds. 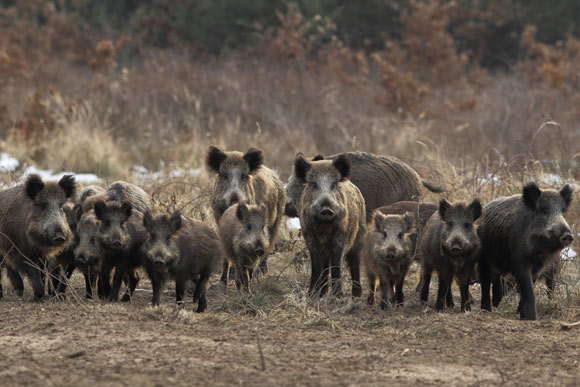 The distribution of wild boar has changed several times over the last several centuries. Climate changes, fluctuating food sources, but also human interventions have led to the constantly changing habitats and population numbers for boars. Climate-related factors, improved food sources, restrictions on hunting and changes to the landscape have contributed to their numbers in the wild once again increasing in the post-war period. At the start of the 2000s, the annual hunting bag was once again over 500,000 for the first time. Even in the 1960s, the number of killed boars was far less than 30,000.