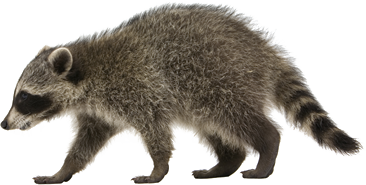 Raccoons are predatory animals belonging to the family of small bears. About the size of a cat, raccoons are unmistakable from their black face masks that stand out against their otherwise white face colour. A black and brown ringed tail is also typical for these little bears. The rest of the European raccoon's fur can vary starkly from black to grey or brown. With a shoulder height of around 25 cm, short legs and a somewhat chubby body shape, raccoons can look a bit sluggish. These animals have a weight of between 5 and 10 kg, with the males generally being slightly heavier than the females. Raccoons are not exactly good runners and their body form means they also can't jump. These little bears are, however, excellent climbers. Using the claws on their front and rear paws they can easily scale house walls, trees or drainpipes without issue. As well as climbing, raccoons use their front paws, the prints of which resemble the hands of small children, for touching things. Their sense of touch is particularly good! Both the front paws and nose have touch-sensitive hairs that they use for investigating their environment. In German, raccoons are known as the “Waschbär”, literally “wash-bear”, due to their observed habit of washing their food, such as small fish, in still waters before consuming it. The “washing” is used for checking out their prey rather than any kind of excessive hygiene ritual. Their senses of hearing and smell are also well developed and help the raccoon orientate themselves. Their vision, on the other hand, is not as good as that of humans. Raccoons cannot differentiate colours. As well as its well-developed senses, raccoons have an excellent memory. Studies have shown that raccoons have a similar ability to learn to that of the rhesus monkey and can even remember number combinations over a period of years when provided with a food reward! In the wild, the animals live for 8 to 10 years and in captivity they can live for up to 20 years. Raccoons have few natural enemies in Germany. Now and again, a bird of prey might take a raccoon cub. The lynx can also present a threat to raccoons. These are rarely seen in Germany, however, and are particularly rare in urban areas. Most raccoons die as a result of being run over, disease or hunting.

Raccoons originated from the USA. Only in the 20th century did they start to appear in Europe as a result of fauna-enrichment projects and from breaking out of European fur farms. Raccoons prefer to live deciduous and mixed forests near to bodies of water. Damp areas with streams, lakes or rivers are particularly their favourite places. During the day, these nocturnal creatures hide away in the hollows of trees, earthworks or old badger burrows. They change their sleeping place almost every day. As creatures that tend to follow where humans go, they have since moved into villages and towns. Here they can find everything they need. They have both a sufficient supply of food and safe places to hide and breed. The size of the territories being used as their habitats is dependent on the local availability of food. Urban raccoons usually cover smaller areas than their counterparts in the wild. There are urban raccoons who are content with an area covering around 20 hectares. Forest raccoons can use areas up to about 2,000 hectares.

Raccoons are omnivores. They will eat whatever is on offer. Early in the year, they mostly eat other animals. Alongside earthworms, insects and snails, they will also go after small birds, fish and mice. In the summer and autumn months on the other hand, plants are their main source of food. Nuts, fruit, berries or vegetable. They are not fussy animals and throughout the autumn will eat up enough to build a thick layer of fat for the winter. They need this excess weight to get through the cold months as they will hibernate for weeks at a time. Only once temperatures start to rise do they become active again and leave their den. Raccoons will often look rather weak and skinny when they emerge, but this doesn't last long and they are soon back to their old weight.

Raccoons are most active during the night and at dawn and dusk. For this reason, it is rare to actually catch sight of these little bears during the daytime. Both males and females live together in small groups. They are very social animals, exchanging scent marks with one another to provide information about suitable sleeping places and sources of food. During the mating season in the months of January and February, males and females will cross paths, resulting in mating activities that can last for several nights!

Around 65 days later, around the middle of April, the female gives birth to a litter of 2 to 5 cubs in her den. The female prefers dens such as old tree hollows that she thoroughly checks for stability and works at using her teeth and claws until she has created a soft nest of wood chippings. Much to the annoyance of humans, the females also exhibit the same activity when deciding on an attic for birthing their young instead of a tree. Wooden walls and insulation are checked for their robustness and then ripped to shreds to make the nest.

The cubs are born blind and are nursed by their mother. Only after 2–3 weeks will the young first open their eyes. At 4–6 weeks old they will leave the nest for the first time to explore their environment and try solid foods. Over time, the cubs become increasingly independent and come autumn will leave their mother. The young males will usually wander far away so as to avoid inbreeding. The females often stay together as a mother and daughter team. In the following year most of the females will become pregnant for the first time. The young males on the other hand, mature only in the second year of life. If a female fails to become pregnant at the start of the year or prematurely loses her babies, then she will have another chance to become pregnant in May and June. Studies have also shown that efforts to control raccoon numbers through hunting and other means are not successful as the animals increase their birth rate in response.