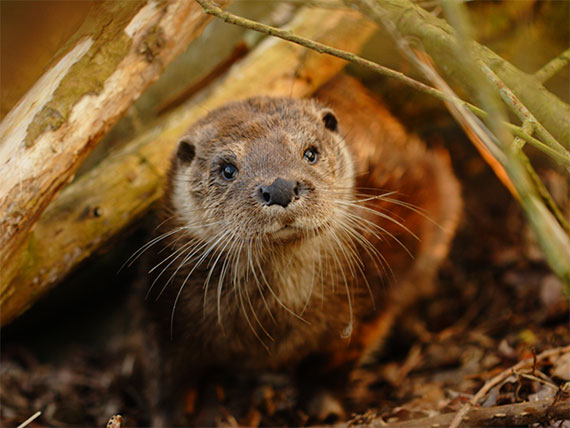 Otters are predators in the same family as martens. Otters are often mistaken for beech martens or minks, which along with badgers all belong to the marten family. Its 7–12 kg weight and body length of 130 cm, 40 cm of which is the tail, makes the otter the heaviest native animal after badgers. Its streamlined body shape is perfectly adapted for life in the water. The webbing between their 5 toes on all 4 paws makes them excellent swimmers and divers. They can dive down to 18 m for up to 8 minutes whilst covering a distance of 300 m. They close their ears and noses when diving. The long body is very flat, and their small eyes and ears as well as short nose are all closely lined up so that they do not need to stick their head very far out of the water in order to use all their senses and observe their surroundings. Alongside their eyes, the most important sense organ of the otter is their whiskers. These allow them to detect obstacles and the movement of fish even in murky waters. The fur of the otter is also perfectly adapted to its environment. Since otters do not have a thick layer of fat to protect them from the cold and wet, their fur acts as a wonderful insulator. Each square centimetre of skin has around 50,000 hairs that link together like little wedges. This keeps an insulating layer of air in their fur, keeping the otter warm and dry. The fur colour is usually a uniform brown with a grey-white patch going from the cheeks, down their necks and to the breast. Despite their short legs, otters are good climbers and can jump up to 1 m high and 1.5 forwards. As such, they can easily climb up trees or over fences.

There has been great relief in the last few years, as the population of otters has been seen to increase. The end of the 19th century was particularly bleak for the little fish lovers. It was at this time that Europe had started pursuing and hunting otters. The coat of the otter was highly desirable and their high-quality meat was considered a delicacy that could be eaten during lent. Otters already had a reputation as destructive fish predators at that time. Industrialisation and the subsequent increased destruction of their habitats from alterations to river flows, drainage of wetlands and clearance drift wood from rivers almost killed off otters by the end of the 20th century. Only through suitable conservation measures and habitat improvements has it been possible to provide the right conditions for otters to find sufficient food and shelter to proliferate.

Otters have since returned to large areas of Europe with the exception of Iceland and the Mediterranean islands. Distinct growth in otter numbers can be seen in the Czech Republic, eastern Germany and parts of Austria. Unfortunately, however, otters are still rather threatened within the areas where they have been increasing. Large areas of western Germany and Switzerland are still free of otters to this day.

As a semi-aquatic animal, otters require both water and land. Preferred habitats are therefore areas with ponds, lakes and rivers, but also marshland and even coastal areas. In order to settle, they need sufficient clean and fish-rich waters for food as well as a range of places to find shelter for sleeping and raising their young.

Otters are solitary creatures. Male otters are not tolerant of any males being in their territory. The areas covered by females overlap those of males. They are shy creatures and mostly active during the night, dawn and at dusk. Throughout the day they hide away in different places. These little predators will generally go fishing just after sunset, using the same entry and exit each time. Their hiding places are usually natural hollows such as undercuttings on river banks, areas with lots of roots or abandoned fox and rabbit holes near to rivers.

An otter's territory stretches along lakes and rivers and a male's territory can cover up to 30 km. Territories range on average from 5 to 20 km. During the night, the animals can cover distances of up to 20 km in search of food. In doing so, they mark interesting parts of their territory with glandular secretions and faeces. These are used as indicators to other otters of things such as territorial boundaries and willingness to mate. Otters are generally quiet animals. Only in certain situations such as mating, sensing of threats or when cubs are playing will they make whistling, screeching, squeaking or growling noises.

The main food source for otters is fish. As a general rule, otters prefer food that takes the least effort to catch. This explains why some otters have a strong preference for artificial fish ponds where the huge numbers of fish are easy prey! As well as fish, they enjoy feasting on crabs, amphibians, water insects, small mammals and birds. They eat around 1 kg of food per day. The exact composition of this varies depending on what prey is available, the region and time of year.

Otters have no particular mating season. As such, females with cubs can be found year round. Young otters mature at around the age of 2. Males and females locate each other using a range of mating calls and whistling sounds. They wander around one another before finally meeting in the water to mate. Around 63 days later, the female gives birth to 2–3 blind and fluffy cubs. The little cubs weigh around 100 g and won't open their eyes for another 3–4 weeks. Although the cubs are able to consume solid food within 6 weeks, the mother will often continue to nurse them up to the 14th week. At the age of 2 months the cubs leave the nest with their mother for the first time to explore their environment and have their first go at swimming and diving. During the following months the mother has a lot of work to do in order to teach the cubs hunting techniques and survival strategies. Partially eaten fish can sometimes be found lying next to ponds. This is most definitely a sign that a mother has been training her cubs to hunt. The exact predator cannot, however, be easily determined from these fish remains. At around 14 months old, the cubs have learnt everything they need to live independently and leave their mother's territory in search of their own. Their life expectancy is 8–13 years. Sadly, many of the animals will lose their lives much sooner. Most fall victim to road traffic. Some will also drown after getting caught in fish traps. For this reason anglers are recommended to fit their traps with protective grates. Unfortunately, the use of protective grates is not yet a legal obligation in conservations areas in Germany.

International agreements, EU regulations as well as federal and state laws have led to otters being protected by a range of legal regulations today. The nature conservation and hunting laws are of particular importance to otters. According to these, otters remain a huntable game. Since 1968, however, a year-round off season for otter hunting has been in force. This means that otters can no longer be killed. It should be noted however, that dead animals may only be received by the local hunting official. Should you come across, for example, an otter that has been run over, then you need to notify the relevant hunting official or the police if you are uncertain. The dead animals are then usually subjected to a scientific investigation. According to the nature conservation law, otters are considered a "specially protected" and "strictly protected" species. They may not be hunted, disturbed and may only handled in very special circumstances. The goal of ensuring the continuation of the species or, where necessary, taking conservation measures to guarantee otter habitats has been fixed into the conservation laws. The fauna-flora-habitat directive has also set the goal of securing and protecting the habitats of endangered species and linking their habitats together across Europe.

How do I identify an otter?

It is very difficult to catch site of these shy creatures during the day. Their presence can usually only be established from their paw prints (tracks) and fecal remains (droppings). Otter tracks are characterised by 5 splayed toes. Upon closer inspection you can often make out the webbing between the toes. The tracks left by the rear paws are slightly more elongated than the front. Brush marks from their tails can also sometimes be identified in snow and dry sand. The webbing between the toes does not generally leave any mark. Otters tend to leave their droppings on elevated areas such a tree stumps or large stones, in sandy areas and at the entry and exit points to their den. The droppings often contain food remains such as crab shells, fish bones or scales and have a very distinct smell. Fresh droppings are slimy, soft and vary in colour between dark brown, green and black depending on what the animal has been eating. Old droppings quickly lose their colour and become dry and porous. Partially eaten fish can also indicate the presence of an otter, but this is not conclusive.