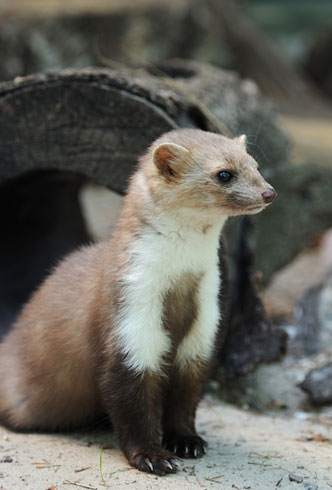 The marten that causes most problems around the house and car is the beech marten. Beech martens are part of the marten family to which their close relative, the pine marten, also belongs. In contrast to the beech marten, the pine marten is found almost exclusively in deciduous forests. Human settlements are avoided by the pine marten. Other animals related to martens are badgers, otters, European polecats, stoats and weasels. The coffee coloured beech marten is identifiable from the forked pattern of white fur running down its front to between the front legs. This pattern is the reason it is sometimes referred to as the "white breasted marten". Another striking feature is their long, bushy tail. Martens resemble cats to some extent. Compared to cats, however, martens are somewhat smaller and thinner and are more light-footed and quick. Their slender bodies allow them to slip easily through small openings that are just 5 cm in diameter. They are also perfect climbers, scaling trees, drain pipes or rough wall finishings with ease. Martens are also excellent at jumping and can reach heights of up to 2 m and distances of up to 3 m. Males tend to be more powerful than the females. A fully grown beech marten can be around 58–84 cm long and weigh 1.7–2 kg.

Martens are most active during the night and at dawn and dusk. For this reason, it is rare to actually catch sight of these shy creatures. Fully grown beech martens are solitary territorial animals, and it is very much possible for the territories of a male and female marten to overlap. Only members of the opposite sex are tolerated. Any other martens of the same sex wandering into another's territory will be driven out with all the bodily strength available. Territories can typically be 30–110 hectares in urban areas. Much large territories up to 300 hectares can be found in wild areas that are free from humans. Beech martens will search out food within their territory and set up shelter in several places. Martens, like cats, are very clean animals. Their hiding places are therefore fastidiously divided into sleeping, feeding and toilet areas. The beech marten does not commit to a single place of shelter and will change between locations at irregular intervals. It may appear that there are several martens causing a nuisance in some residential areas, when in fact there is only one single animal.

During their wanderings, the martens always use the same routes and mark these as their territory by leaving scents, faeces and urine. One of these creatures can easily cover a distance of 14 km in one night on the hunt for food.

During the mating season from the end of June to the middle of August, males and females come together. 7–8 months later (end of February to beginning of April), the female gives birth to a litter. A litter is typically 2–4 under-developed young in size. The kits are born blind and won't open their eyes until they are 5 weeks old. The mother will nurse the little ones until the 8th week. At 10 weeks old they make their first careful foray outside of the nest to explore the world with their mother. Over time, the kits become increasingly independent and come autumn will seek out their own territory. The young animals will often share their mother's territory, but only until early the next year. Many homeowners get particularly bothered during the mating and breeding seasons. The animals are very active during these periods and the noise can become at times intolerable.

Beech martens are highly adaptable. They will eat anything they can put in their mouths. Alongside wild and garden fruits, they will partake of small animals such as mice, rats, birds and their eggs. Beech martens are often known to be egg thieves. They like taking eggs to keep them for when food is more scarce. The beech marten can open its lower jaw to 90° from its upper jaw to carry the egg. When breaking into chicken coops they are mostly just after the eggs and not the chickens. However, the chicken often receive lethal bites as their flapping about makes the martens aggressive. Other sources of nourishment are insects, earthworms and carrion as well as bird seed or human household waste.

Beech martens are spread widely across southern and central Europe and south Asia. Martens follow where humans go with villages, towns and cities being popular habitats alongside fields and forests. They can find everything they need in human settlements. They have both a sufficient supply of food and safe places to hide and breed. These little predators have been living alongside humans for centuries. Taking up residence in hutches, sheds, wood piles or houses, often without being noticed. The first evidence of martens getting inside the engine compartments of cars came about in Switzerland in 1978. Since then, more and more martens have cottoned onto these mobile hideaways. Particularly in cities where there is a plentiful food supply but fewer safe places to take shelter, engine compartments in cars have emerged as excellent places to hide. In some cities in the south of Germany, almost one in three cars parked outdoors have signs of marten activity.